The largest bakery in the world becomes a global partner of the Blaugrana Club, and its logo will appear on the sleeve of the shirt of the first women's football team 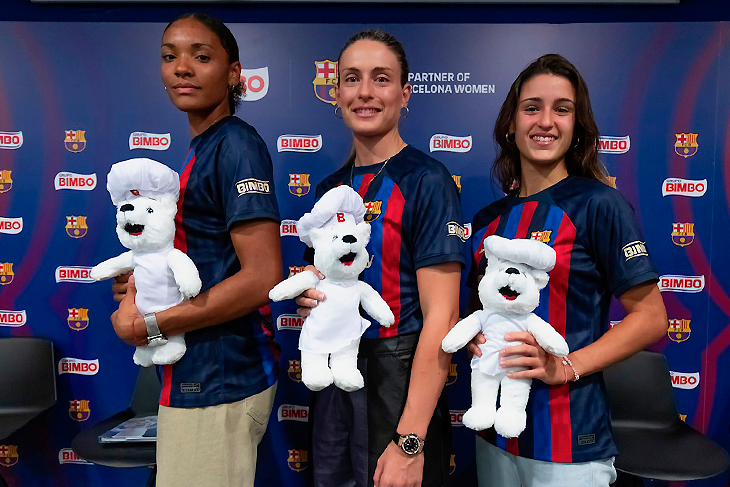 Grupo Bimbo, the largest bakery in the world, and FC Barcelona have signed an agreement with which the global brand BIMBO®️ becomes Global Partner of the Club and Main Partner of the first women's team. An alliance whose strategic axes are the commitment to female talent and equity, the promotion of nutrition and healthy lifestyles, and the promotion of young talent. This is the first time the Mexican company sponsors a women's soccer team.

Through this agreement, both organizations will work to positively impact society by promoting habits that contribute to the greater well-being of people and building a more sustainable environment. They will also work to break stereotypes regarding women's figures.

The first time the team wore the new shirt with the global brand BIMBO®️ was this Wednesday, October 19, at the premiere of Jonatán Giráldez's players in the Champions League against Benfica at the Johan Cruyff Stadium.

The official presentation of the agreement took place this Wednesday at the Auditori de la Masia in a pre-match ceremony, which was attended by Juli Guiu, Vice President of the Marketing Area of FC Barcelona. At the same time, Alberto Levy, VP Global Marketing, and Rosa Alabau, Head of Sustainability of the global Marketing team, participated on behalf of Grupo Bimbo®️. Barça also attended first-team players Alexia Putellas, Jana Fernández, and Salma Paralluelo, who participated in a panel with Club nutritionist Mireia Porta.

During the event, the different synergies foreseen within the agreement were explained, while the players highlighted the importance of having a partnership like this to help increase the visibility of women's football, as well as the need to show new generations the importance of breaking pre-established barriers and that prejudices should not condition them.

"At Grupo Bimbo we want to nourish a better world, and this alliance with Barça allows us to make this purpose tangible since, on the one hand it aligns with our sustainability strategy and on the other, it reinforces the fact that we continue to generate initiatives in favor of female talent. In addition, it will let us make visible all the benefits that bread has and how it is part of a balanced diet with this great speaker that is Barça, with the different activations that we will do together, "said Alberto Levy, VP Global Marketing, Grupo Bimbo.

Rosa Alabau, Head of Sustainability for Grupo Bimbo's global Marketing team, added: "This agreement adds to the multiple global and local initiatives that the group already carries out to promote the development of female talent. Through this alliance, Grupo Bimbo will carry and amplify the message of equality at a global level, thanks to the recognition and influence that FC Barcelona has in the world, leveraged by the talent and example of its women's team".

During the presentation, Juli Guiu, Vice President of the Marketing Area of FC Barcelona, said: "This agreement is a historic milestone, since it is the first time that our first women's football team will have a partner up its sleeve, a new step forward in the equality of women's and men's sport. We will also work to promote active and healthy living among our fans. For all these reasons, I am proud to say that we are starting a new stage together with Grupo Bimbo, which will allow us to continue consolidating our motto of 'More than a Club,' which reflects our recognition of the power of sport to change the world."

Barça Women has become a benchmark both on and off the field, thanks to its style of play and the values it represents, dismantling many prejudices about women in sports and allowing its athletes to become an inspiration and reference for many girls and women around the world.

Within the framework of the agreement, in addition to being a global partner of the Club and Main Partner of the women's football team, BIMBO®️ will also collaborate -to promote new talents- with La Masia, the FC Barcelona training center that has become an international benchmark in the field of sports and human training; the Barça Academy, the Club's international schools project and the previous step to its training teams;  and with the Sports Tomorrow Congress, the sports innovation congress organized annually by the Barça Innovation Hub and which in the 2023 edition will be integrated into the Mobile World Congress.